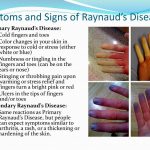 Raynaud’s Disease (also called Raynaud’s Phenomenon) is a medical condition. It is named after the French physician, Maurice Raynaud, who first described it. Although the fingers of healthy individuals may become pale in response to severe colds, the effect is exaggerated in individuals with Raynaud’s symptoms. Even mild cold exposure can cause significant symptoms. 80% of sufferers are women, and as many as 5% of the U.S. population has Raynaud’s disease.