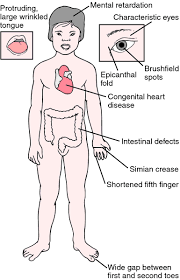 A congenital condition characterized by a distinctive pattern of physical characteristics including a flattened skull, pronounced folds of skin in the inner corners of the eyes, large tongue, and short stature, and by some degree of limitation of intellectual ability and social and practical skills. It usually arises from a defect involving chromosome 21, usually an extra copy (trisomy-21).

Down syndrome is a genetic disorder caused when abnormal cell division results in an extra full or partial copy of chromosome 21. This extra genetic material causes the developmental changes and physical features of Down syndrome.

Down syndrome varies in severity among individuals, causing lifelong intellectual disability and developmental delays. It’s the most common genetic chromosomal disorder and cause of learning disabilities in children. It also commonly causes other medical abnormalities, including heart and gastrointestinal disorders.

A better understanding of Down syndrome and early interventions can greatly increase the quality of life for children and adults with this disorder and help them live to fulfill live.

Each person with Down syndrome is an individual — intellectual and developmental problems may be mild, moderate or severe. Some people are healthy while others have significant health problems such as serious heart defects.

Infants with Down syndrome may be average size, but typically they grow slowly and remain shorter than other children the same age.

Most children with Down syndrome have mild to moderate cognitive impairment. Language is delayed, and both short and long-term memory is affected.

When to see a doctor

Children with Down syndrome usually are diagnosed before or at birth. However, if you have any questions regarding your pregnancy or your child’s growth and development, talk with your doctor.

Human cells normally contain 23 pairs of chromosomes. One chromosome in each pair comes from your father, the other from your mother.

There are no known behavioral or environmental factors that cause Down syndrome.

Most of the time, Down syndrome isn’t inherited. It’s caused by a mistake in cell division during the early development of the fetus.

Translocation Down syndrome can be passed from parent to child. However, only about 3 to 4 percent of children with Down syndrome have translocation and only some of them inherited it from one of their parents.

Some parents have a greater risk of having a baby with Down syndrome. Risk factors include:

People with Down syndrome can have a variety of complications, some of which become more prominent as they get older. These complications can include:

For people with Down syndrome, getting routine medical care and treating issues when needed can help with maintaining a healthy lifestyle.

A genetic counselor can help you understand your chances of having a child with Down syndrome. He or she can also explain the prenatal tests that are available and help explain the pros and cons of testing.

Benefits of Massage for Down Syndrome

For Children with Down Syndrome, studies show that massage is able to increase muscle tone, promote more on-task-related skills, and provide relief from constipation, and aid in body awareness. Massage therapy can also benefit people with other neurological disorders or neurodegenerative disorders.

Massage May Enhance Motor Development in Children with Down Syndrome